I have written a short novel as my narrative.
I made a fabric book with illustrations and stitched details.
Here is the synopsis followed by the full story.
It will make me very happy if you could read the whole thing!

No.0 is a 17-year-old girl who has been 17 for almost 7 years. She has 9 friends, who are numbered No.1~No.9. They have been living together for a long time. They all look similar to each other; long dark hair, fair skin, and petite figures. Though they look so much alike, No.0 makes clothes for them according to their unique personalities. Every day, she enjoys dressing the girls in the morning and undressing them at night. However, strange things start to happen when she decides to become 24 on her next birthday. One by one, her friends go missing until only No.0 herself is left. When she turns 24, she discovers the hopeless truth that her best friends didn’t exist after all and all of them were her split personalities which became her imaginary friends in her refusal to grow up.

the book jacket with crochet embellishment and resin bookmark 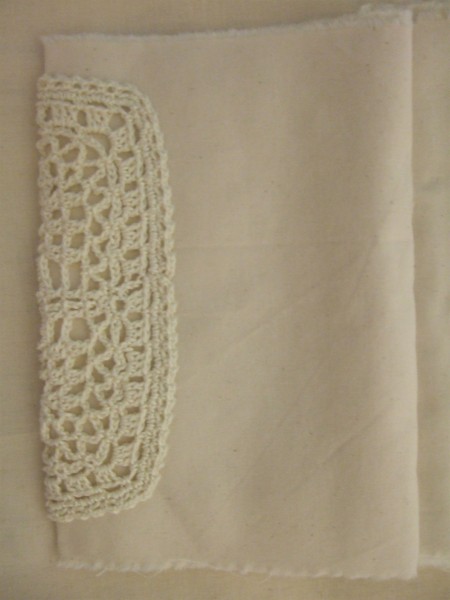 title: YOU’RE ALL MINE 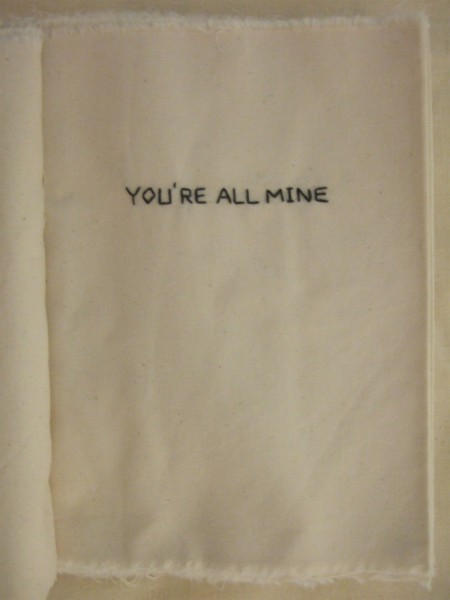 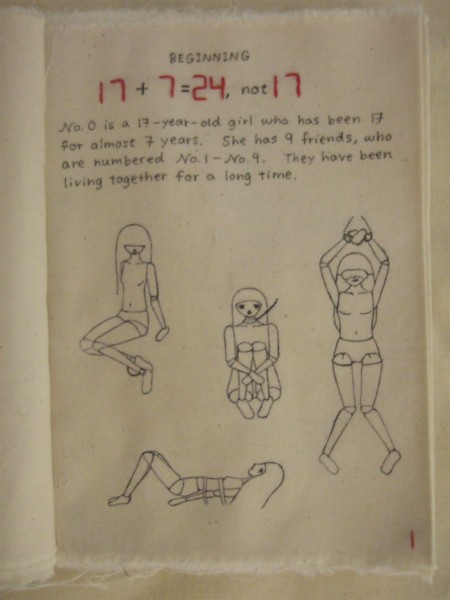 They like to stay inside their rooms and prefer the darkness of night to the brightness of day. 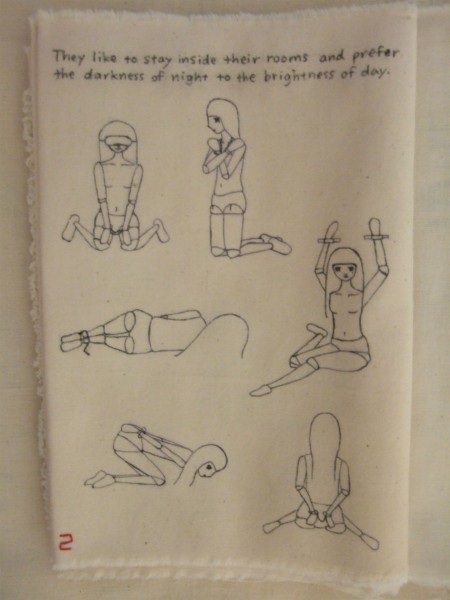 CHAPTER 0
No.0 the Controlling Girl
She has authority over the rest of the girls. She hardly sleeps and spends her time making clothes for them. She has pain in her right hand and arm due to overuse. Every day, she enjoys dressing the girls in the morning and undressing them at night. 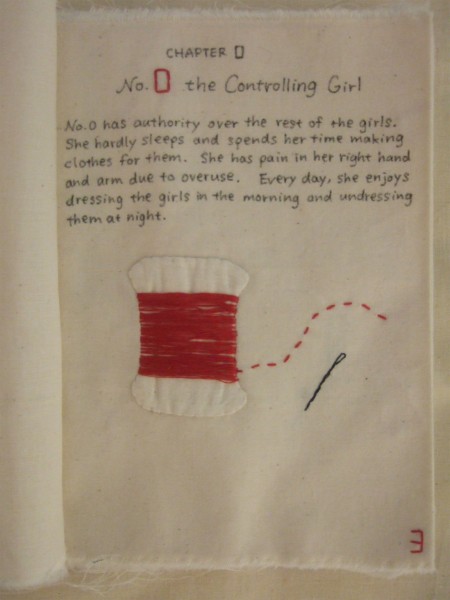 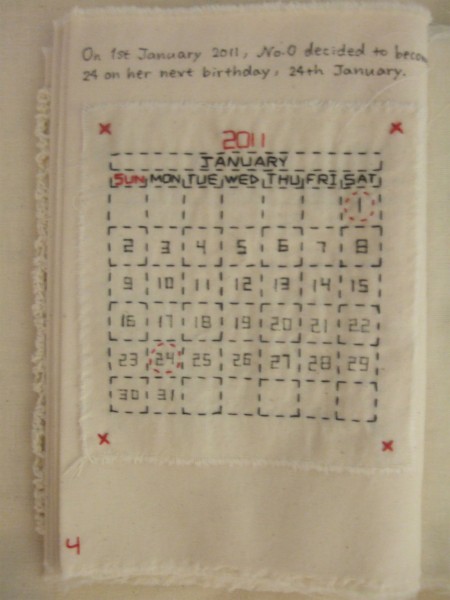 CHAPTER 1
No.1 the Suicidal Girl
She is always depressed from thinking too much and doesn’t want to live anymore. She sheds tears of lemon juice when she wants to disappear. She has a small towel to wipe her tears away. 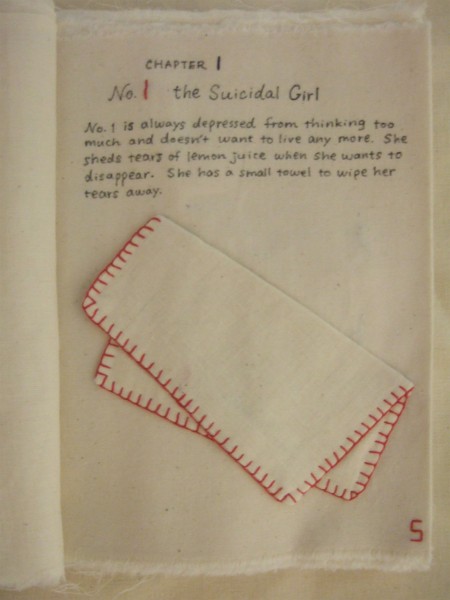 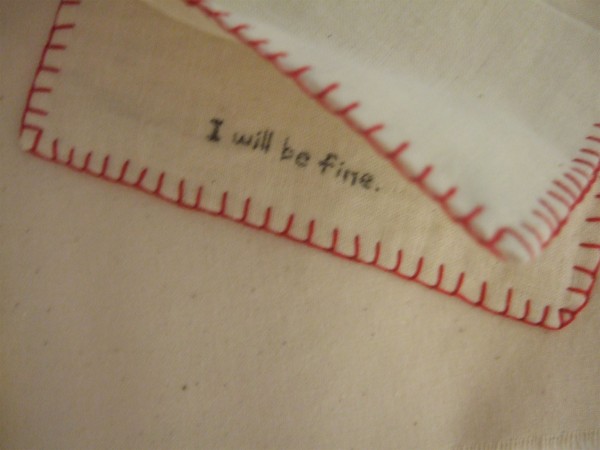 At that night, No.0 realised that No.1, who never leaves her room, was missing. No.0 was confused because she seemed happy for the last few days. There was a note on her bed. “I wish the world would end itself and kill me before I decide to kill myself to end my world.” No.0 was shocked but she didn’t want to think about it and didn’t tell the other girls. 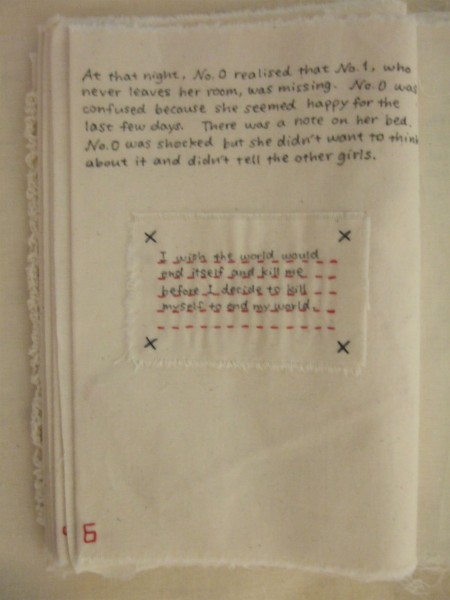 CHAPTER 2
No.2 the Sensuous Girl
She lives for pleasure and she does not like to think. She is the only one to have an interest in boys and sleeps around without feelings. She is feeling either satisfied or empty. 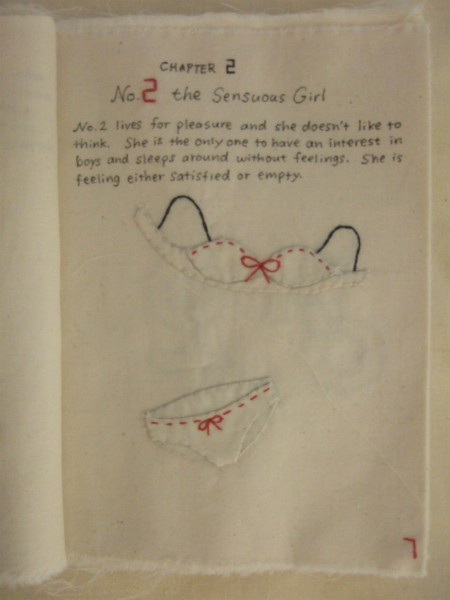 No.0 only realised on 8th January that No.2 was also missing because she had not been back for a week. No.2 was often away for few days staying at random men’s places. She used to say, “They are not attractive. But it’s easy and you just get used to it.” However, No.0 knew that men are evil and that No.2 was in trouble. She didn’t search for her because she was not ready to face men.

CHAPTER 3
No.3 the Smart Girl
She is a realistic girl who likes numbers, charts, and symbols. She is good at calculating, planning, and answering questions. She doesn’t like changing plans or disorganisation. 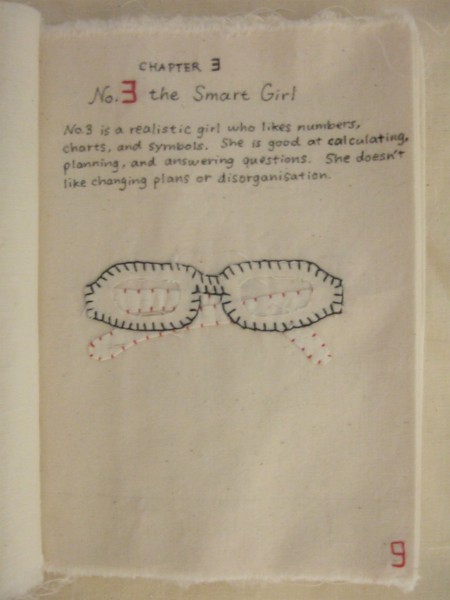 On 11th January, the usually calm No.3 seemed upset so No.0 asked her what the problem was. No.3 answered, “Someone messed up my plan, one of my calculations doesn’t match, and I don’t understand why my thoughts never change!” and shut herself up in her room for the rest of the day. No.0 thought that maybe No.3 noticed the missing girls and became upset. However, she was gone the day after as well. 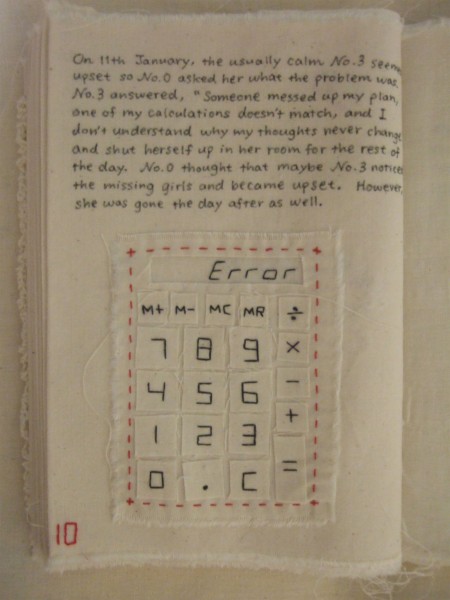 CHAPTER 4
No.4 the Cultured Girl
She is a busy girl who enjoys films, art, and music. She likes the themes of ‘girl’ and ‘fantasy’. She is also into photography and a collector of girls’ images. 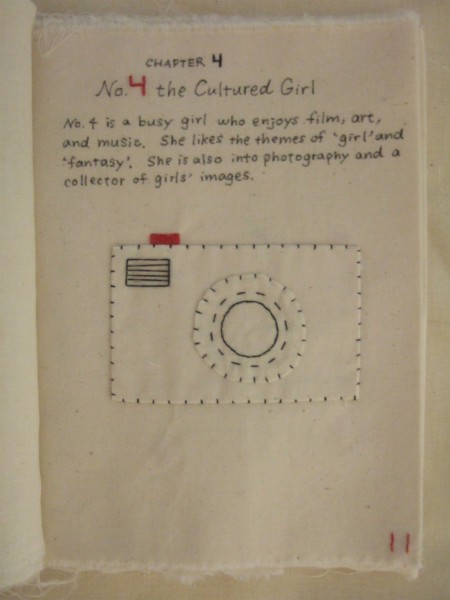 On 15th January, No.4 suggested No.0 that they take a photo together “as a memory of being alive”. It was strange because No.4 never wanted herself in photos. Next morning, No.0 found No.4’s folder of her favourite girls’ images in front of her door. At the back of the cover was the photo of them with a note, “I am not sure if I really like girls. Maybe I am just jealous.” No.0 knew that she was already gone. 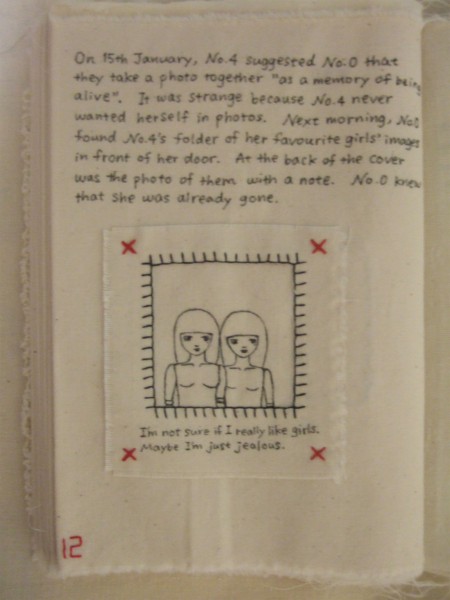 CHAPTER 5
No.5 the Self-Conscious Girl
She cares a lot about how she looks and takes great care of herself. She loves dressing up and her nails are always nicely painted. Her only interest other than herself is the mirror. 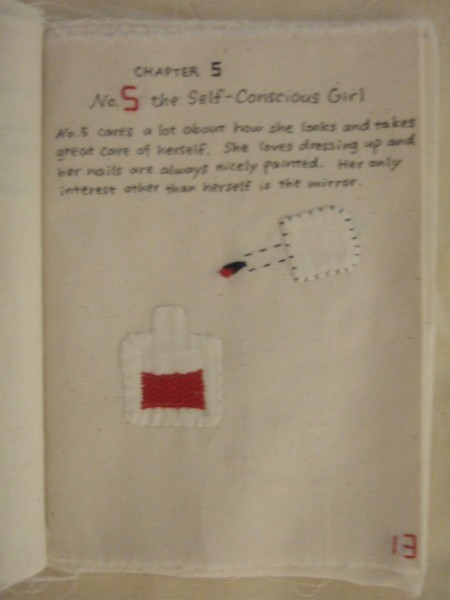 No.0 was getting sensitive these days because there was definitely something going on with the girls. She was remembering what No.5 said the night before, “I lost my consciousness because I didn’t need it anymore.” She entered No.5’s room, which was full of her clothes and so on. She was relieved to find No.5 but it was not No.5 but only a reflection of herself in one of the full size mirrors. 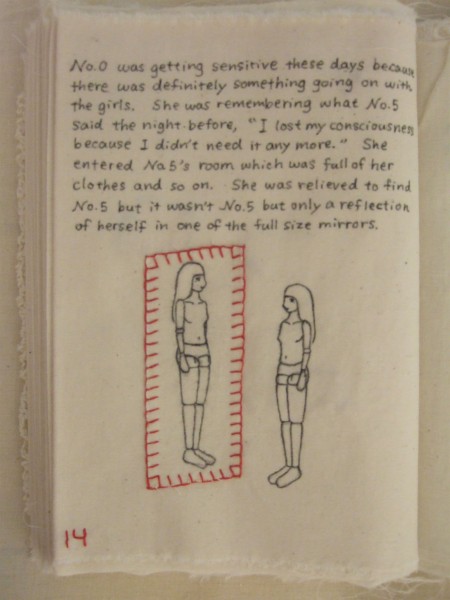 CHAPTER 6
No.6 the Dreamy Girl
She sometimes confuses reality with her dreams. She enters the other girls’ dreams by talking to them when they are sleeping. 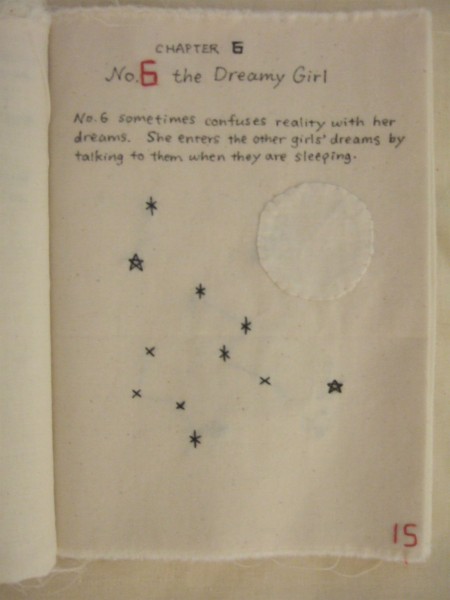 These days, No.6 was spending more time sleeping than being awake. No.0 has been telling her not to escape from reality but she said her dreams felt so real. On 17th January, No.6 didn’t come out of her room for the whole day. She probably lived the whole day inside her dream without realising. She was not there when No.0 came to wake her up and that fact wasn’t a dream. 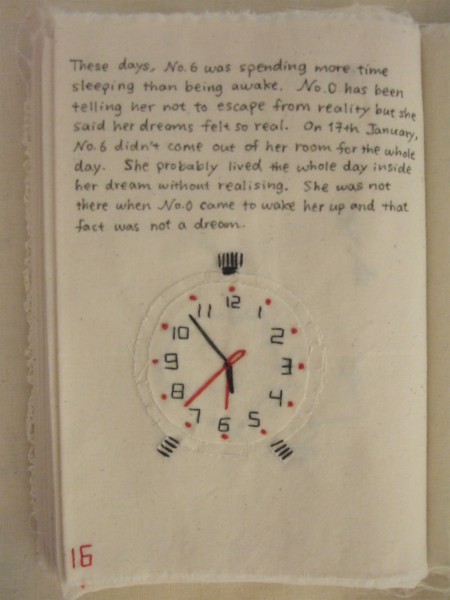 CHAPTER 7
No.7 the Amusing Girl
She doesn’t smile very often but likes to make the other girls laugh. She sometimes has a dark sense of humour which can hurt others at their weakest spot. 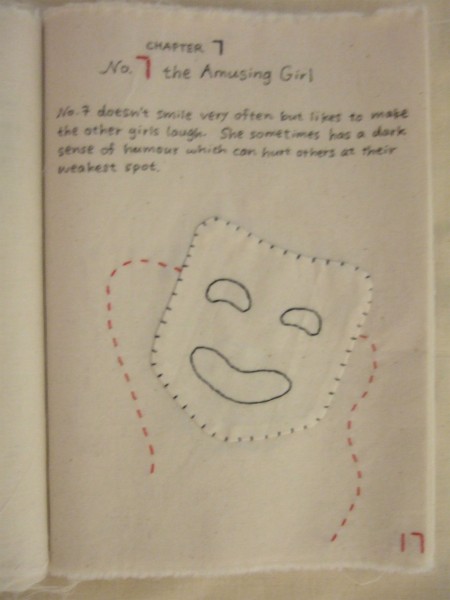 After No.6 was gone, No.7 never smiled and did not speak, not that she smiled or spoke much before. On 20th January, No.0 tried to kiss her to cheer her up but she turned away and said, “It’s not funny. No one is more interesting than I am.” No.0 wished she could make her laugh but she did not know how. No.7 was leaving and she couldn’t do anything about it. 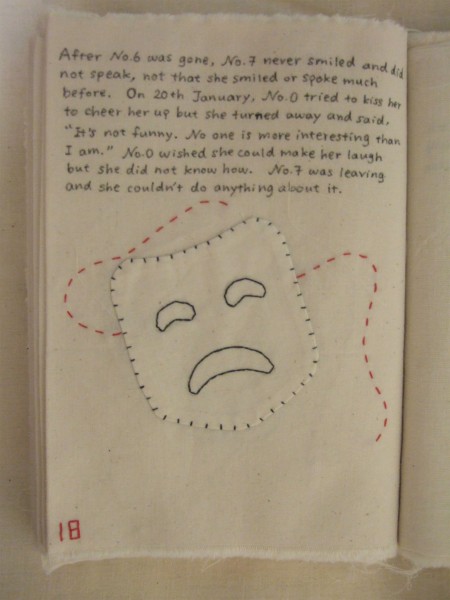 CHAPTER 8
No.8 the Passive Girl
She doesn’t have confidence in herself and praises the other girls. She feels comfortable when she is helping the others or being used. 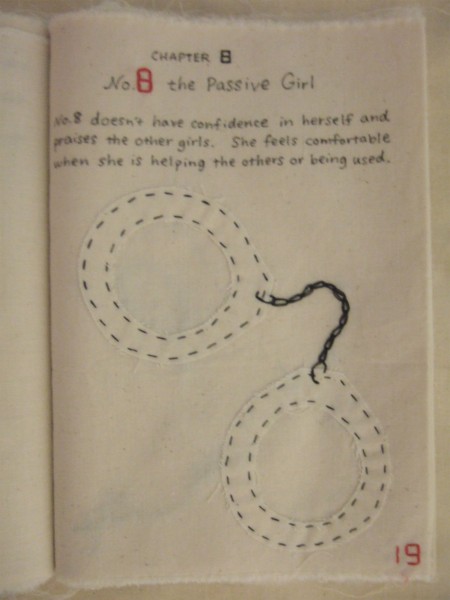 Only three of them left, No.8 was feeling sorry for the other two that she was still there while the other girls were gone. On 21st January, she asked No.0 in a serious tone, “Am I special enough?” No.0 answered, “You are so normal that it makes you very special.” With her eyes downcast, No.8 kept quiet for a long time so No.0 took her to bed and slept beside her. When No.0 woke up, she was gone. 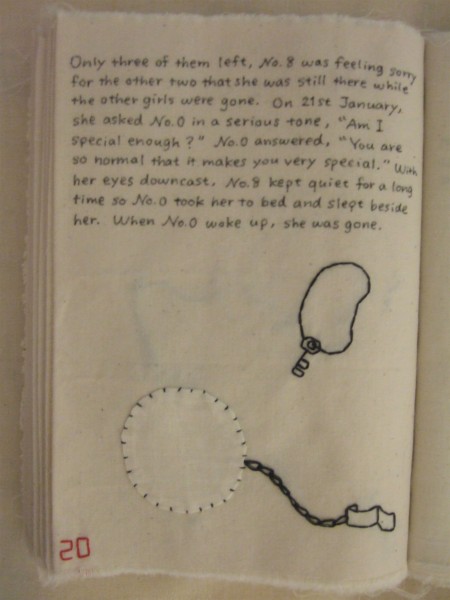 CHAPTER 9
No.9 the Solitary Girl
She likes to be alone most of the time. She wants to be liked by everyone while not being interested in anyone. 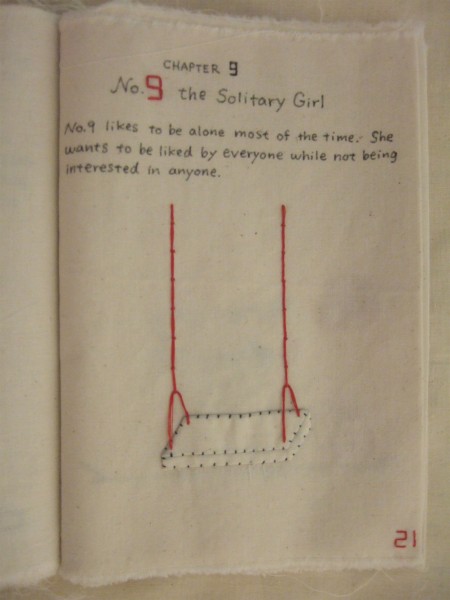 Finally, No.0 lost everyone except for No.9. No.0 knew that No.9 is quite comfortable on her own. However, in such a situation, No.0 made a mistake and asked the worst question to her, “Are you okay?” No.9 looked troubled and said, “I was okay until you asked me if I was okay!” No.9 was okay as long as she appeared to be okay. She ran away and she was not coming back. It was 23rd January. 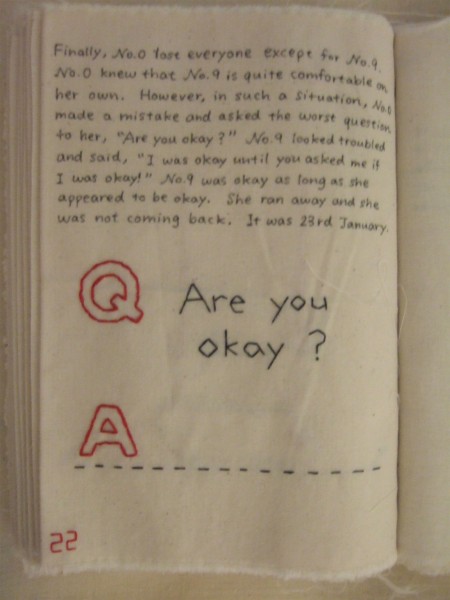 END
24th January 2011
It was her birthday, 24th January, and it was time for No.0 to become 24. She felt strange to be all alone after all those years of living with her 9 friends. She loved each of them so much and had been using all her energy for them.

Now that the girls were gone, she decided to collect all the clothes she had ever made for them. However, she couldn’t find them. Actually, she couldn’t even find their rooms. Her own room was the only room and she found all the clothes in her own wardrobe. Then she remembered. It was time for her to become 24. 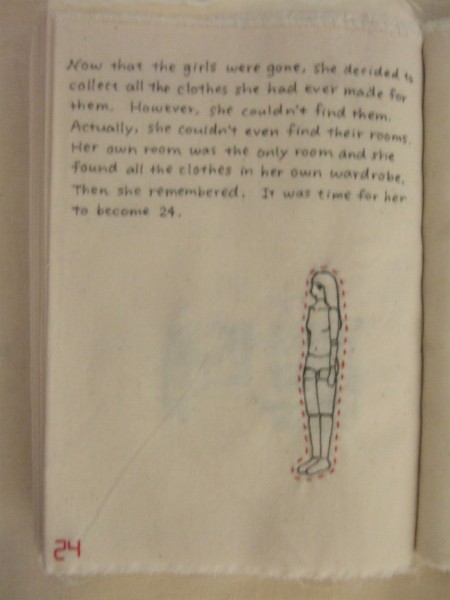 the other title: YOU’RE ALL IN ME 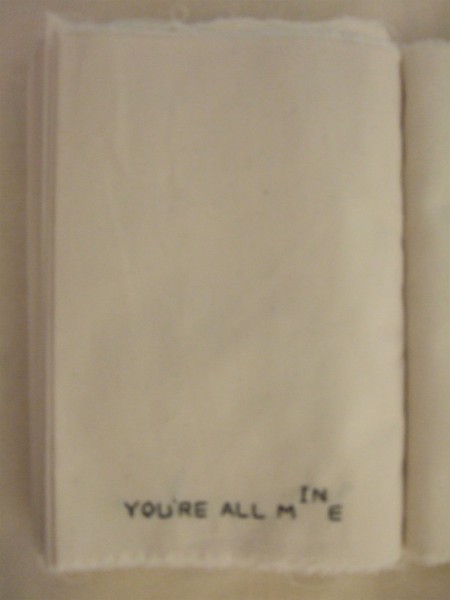